THE SKY IS FALLING 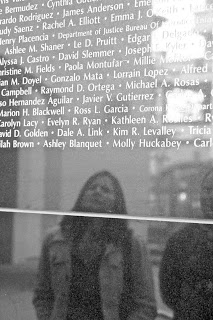 Lately, I have been having dreams where I am weeping inconsolably. I don’t know if this is a result of taking anti-depressants - the subconscious mind finding an outlet for what the conscious mind blocks - or if it is simply the reality of Rachel’s loss to us finally settling into the deepest levels of my mind.

I have also had dreams of her being here but not here - back from the dead, but not realizing what has happened to her. In these dreams I try to hold her, try to find some way to keep from breaking the spell that will send her back, away from us.

Two years later, we are still struggling with this loss, as we will, no doubt, for the rest of our lives...

A plaque inscribed beside the wall states:

A VICTIM’S VOICE WILL BE HEARD

On this wall the names of victims appear.

Violent crime removed their voices from our community.

It is the commitment of the men and women of the

that a victim’s voice will be heard in our courts

and the lives of our loved ones

will not have been in vain.

Above the entrance to the new facility is written in golden capital letters:

LET JUSTICE BE DONE THOUGH THE HEAVENS MAY FALL

As a family, we are honored that Rachel’s name appears among those written on this wall of remembrance of victims of violent crime. We appreciate that the crime that took her from us is acknowledged for what it is: an act of violence.

But this is not what we had hoped Rachel would be remembered for. She was and is for us so much more than a victim, a name among too many other names scratched upon the surface of a black wall. And the meaning and value of her life is not a matter to be decided in a court of justice.

For us, Rachel was too good, too beautiful, too alive to be just...gone. We still can’t get our minds around the hard, cruel fact of her enduring absence. And those who visit the memorial and read her name written there will never know the real and vibrant and beautiful human being, full of dreams and promise, that Rachel was. In my mind, water should perpetually pour over the memorial wall standing in the center of a black marble bottomed pool to represent the innumerable and unfathomable tears shed by those left to mourn those who have been lost...

What is left for us? Two years out and still waiting, “A VICTIM’S VOICE WILL BE HEARD” and “LET JUSTICE BE DONE THOUGH THE HEAVENS MAY FALL” ring hollow in our ears: The woman who killed our precious daughter so far has successfully eluded the consequences of her actions. Rachel’s voice has not been heard. No one has been able to speak for her, and no one has been made to answer. Justice has not been done, and I don’t know which will come first: a trial, or the sky falling...